…as Fall slowly ‘leaves’ us and opens the chilly door to Winter, time to sit back and enjoy the colourful highlights of past weeks (preferrably in a comfy chair, with some cake and cup of tea)

There were battlefields of chestnuts and colourful magical fungusamongus pop-ups…

Long-legged shadows and lots of patterns and textures…

Tears from heaven with November rain

Short and longer walks (and lots of stopping to take pictures)

…And for those with an imaginative eye nature gives some subtle hints that Christmas is definitely coming!

Enjoy these last days of November!

Luxemburg’s Müllerthal region is where we found ourselves last week: a little nature break in an impressive geological and green mini paradise nicknamed Little Switzerland….

We stayed in Hotel Meyer in Beaufort with start of many hiking tours and Beaufort’s renaissance castle within walking distance.

Leading hiking track in the region is the Müllerthal trail, 112 km long and composed of three main routes linking the several villages and their natural and cultural highlights. These three routes are all connected however can just as well be hiked seperately and, if feet are not weary enough, another four extra tours complete the region’s wanderlust Erlebnis.

First day of our tip we explored Beaufort and walked part of the b1 hike starting at castle. 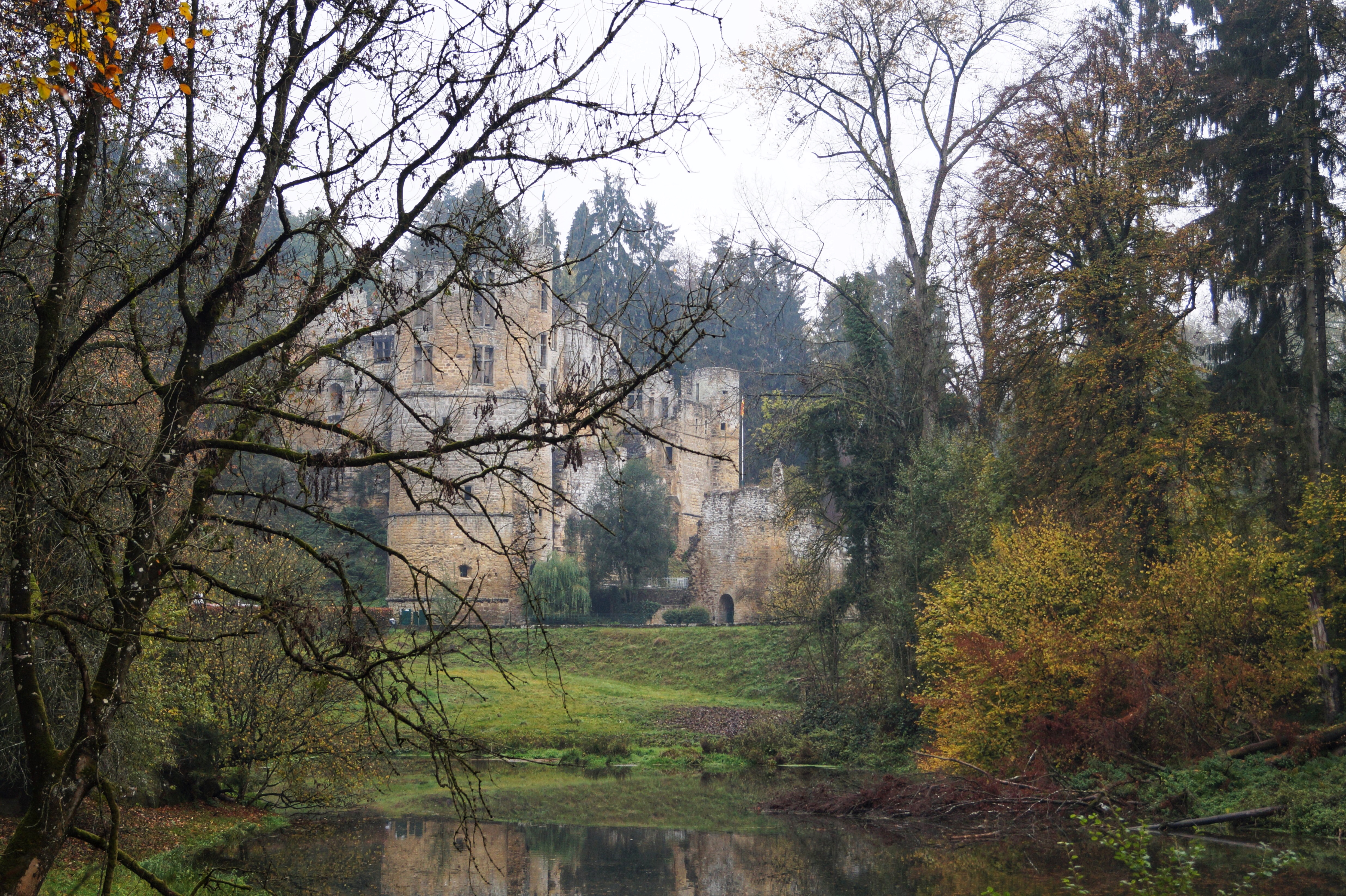 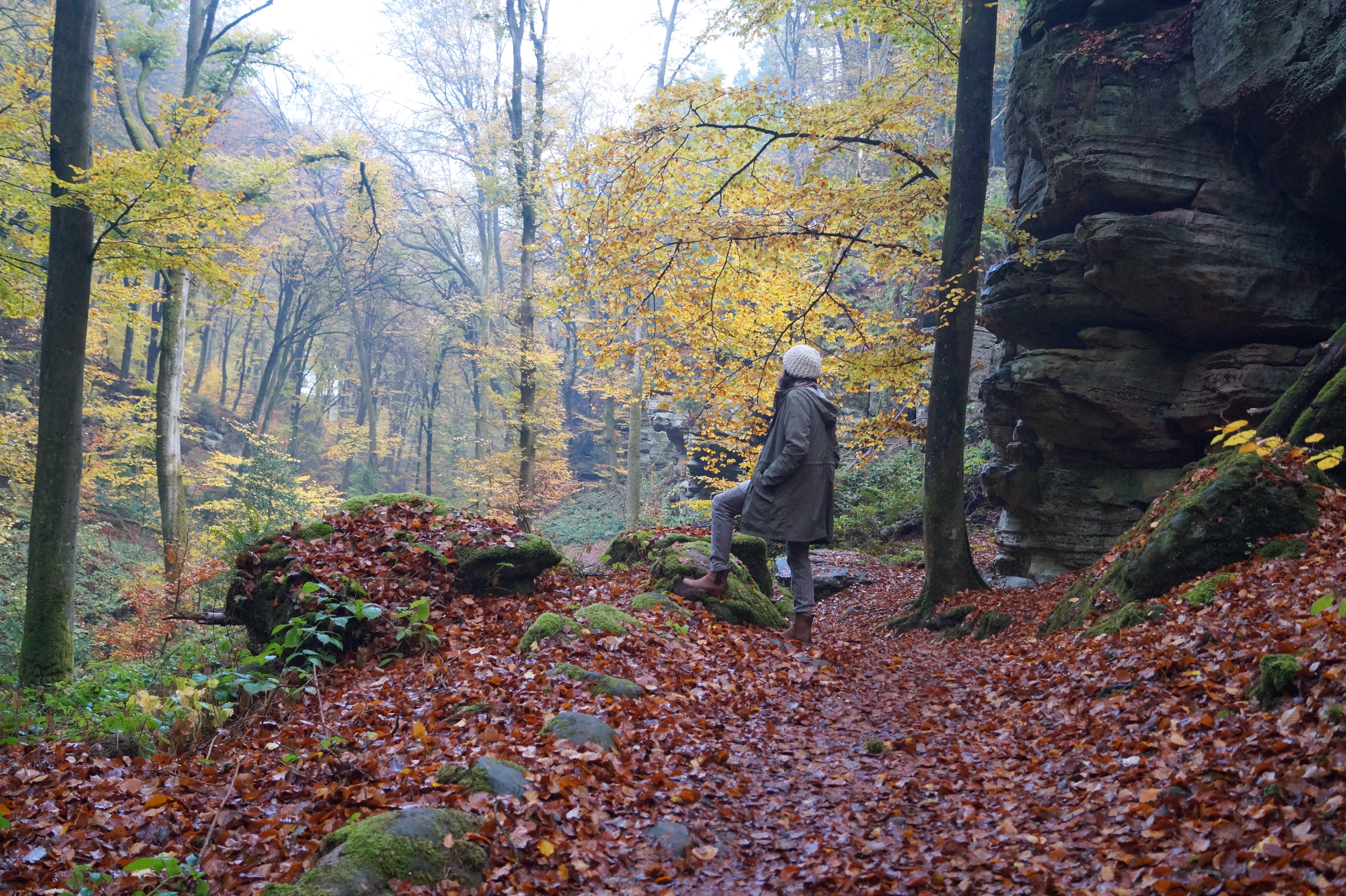 Day two was all rainy and windy, die-hards wouldn’t let this stop them from hiking; not that fanatic though 😉  we took a trip to nearby Trier to indulge us in warm coffee, chocolates, some shopping and local beers.

Day three and already final day of our nature break…sun present again so we decided to make most of this day starting off with an early morning walk in neighbouring Grundhof. With moist and rain of previous day still in the air and soil (and my bones) this gave a strange mystical feel to the forest.

From where we stood, pointing the camera in the other direction gave the below photo, and no…not a b&w one…glad Halloween was over, tiny bit creepy! 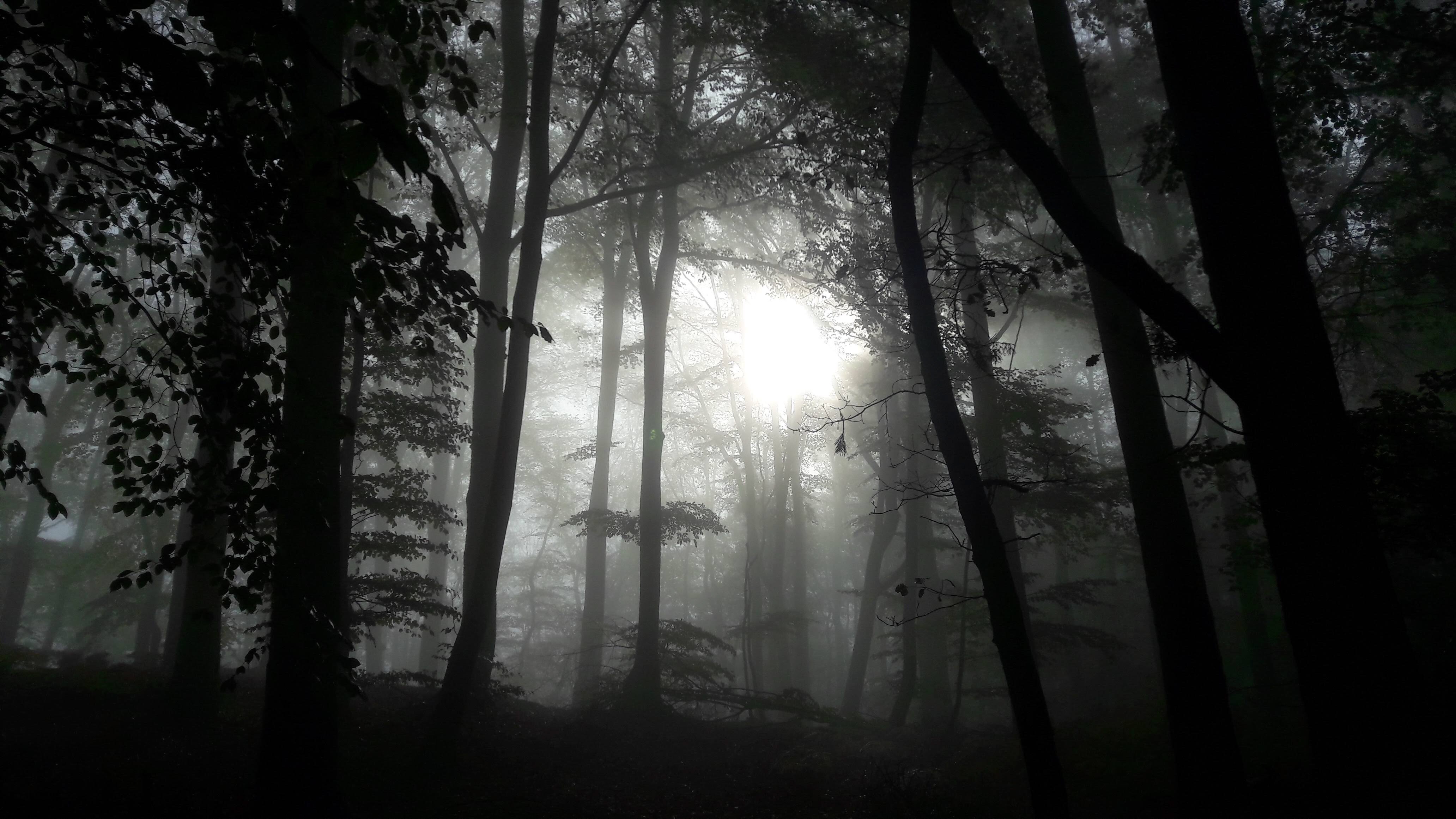 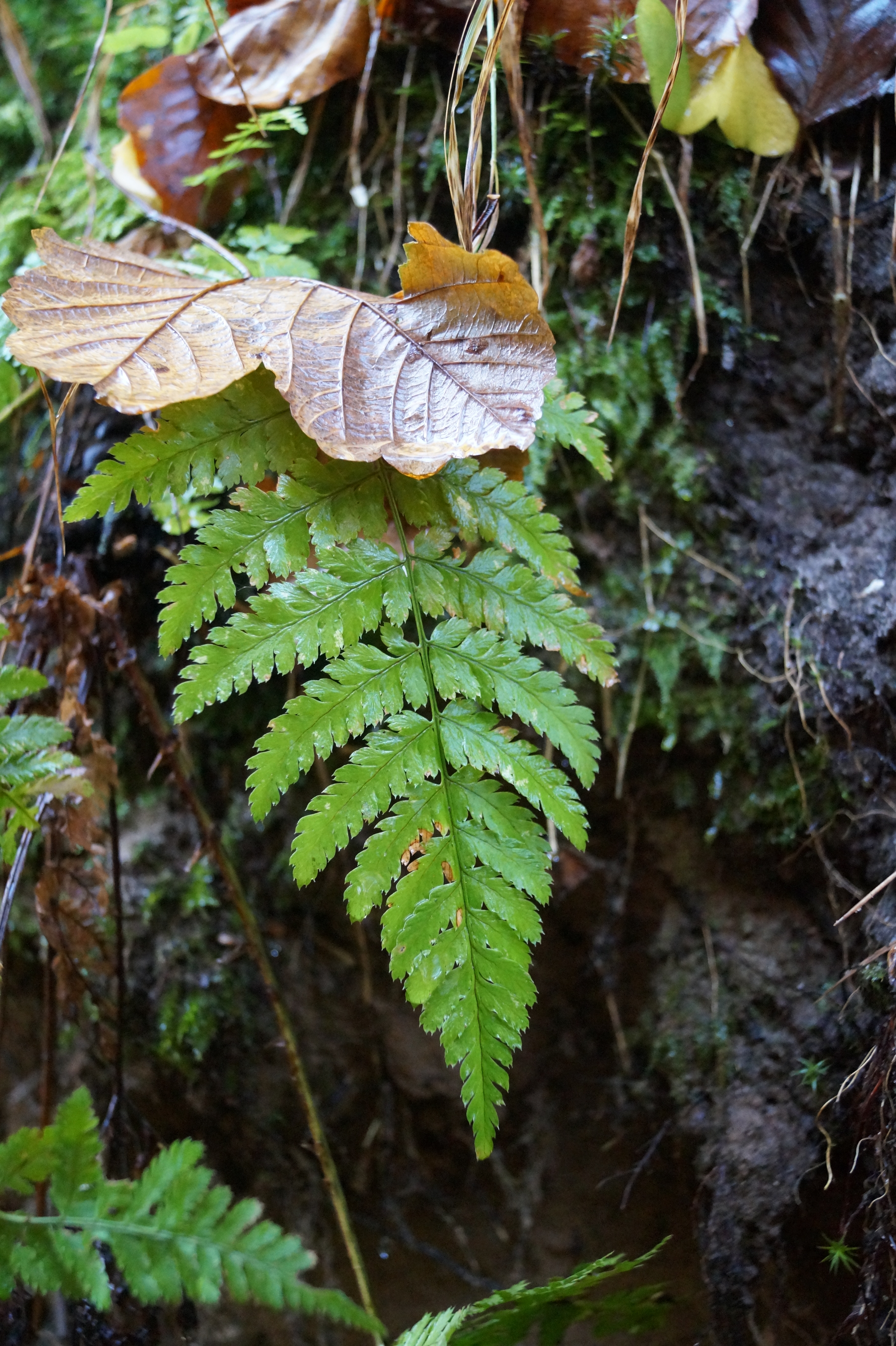 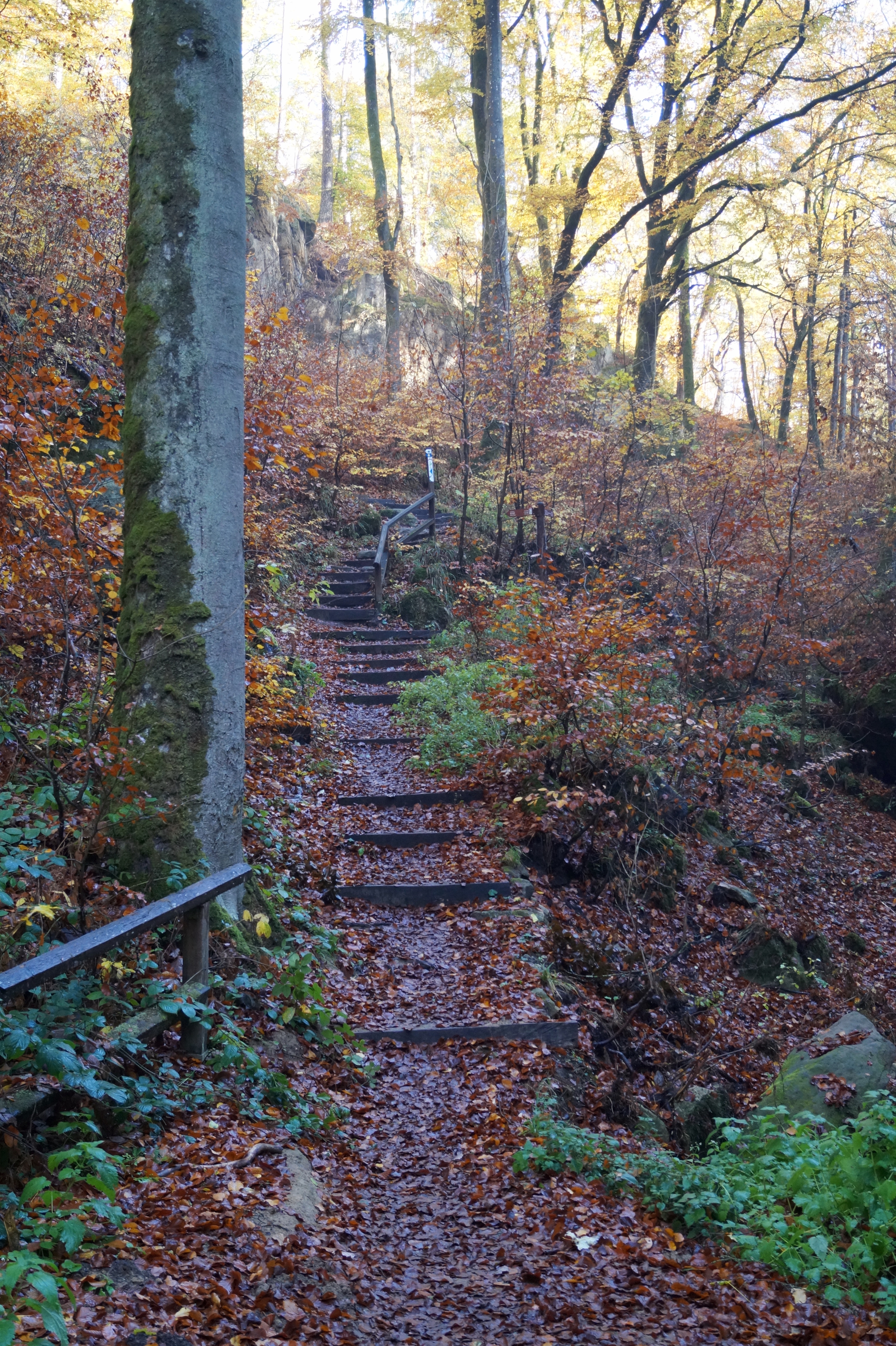 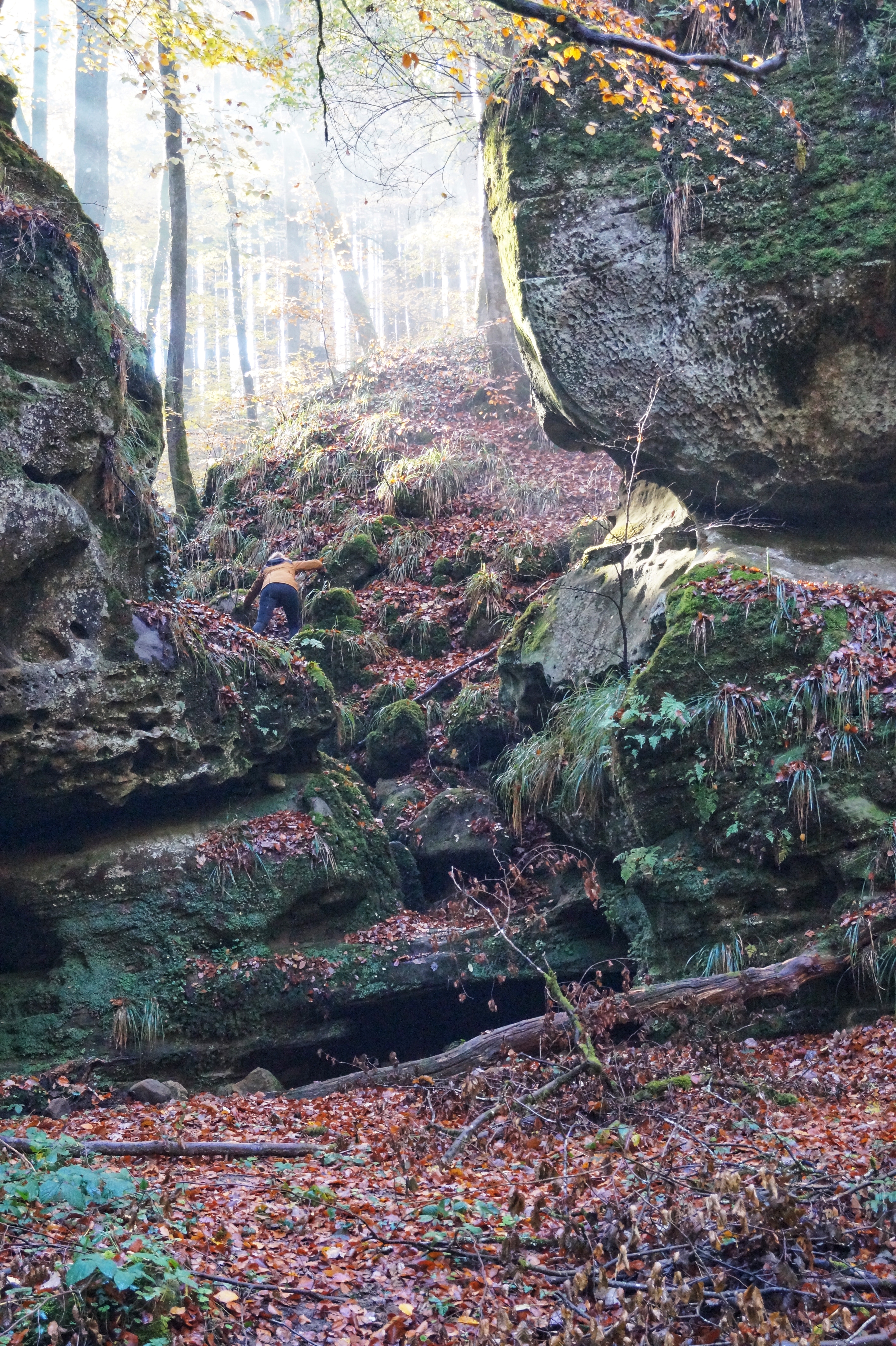 Typical are the rock formations and narrows…curious how nature formed such a mind-blowing landscape?

Millions of years ago, Müllerthal region was covered by a large sea. Over time, however, a thick layer of sand covered the clay underground. When the sea receded and water starting flowing over land, the relatively soft sandstone eroded, eventually forming a landscape of stream-filled valleys and cliffs. However, when water filters through the porous sandstone and reaches the watertight layer of clay beneath, it builds up and is trapped resulting in destabilizing the rocks around the valley edges, causing parts of sandstone to slip down the valley or break off completely.

Pretty sure that’s one of our ancestors coming peeping out of the rock…anybody else see the human head shape, or is it just me? 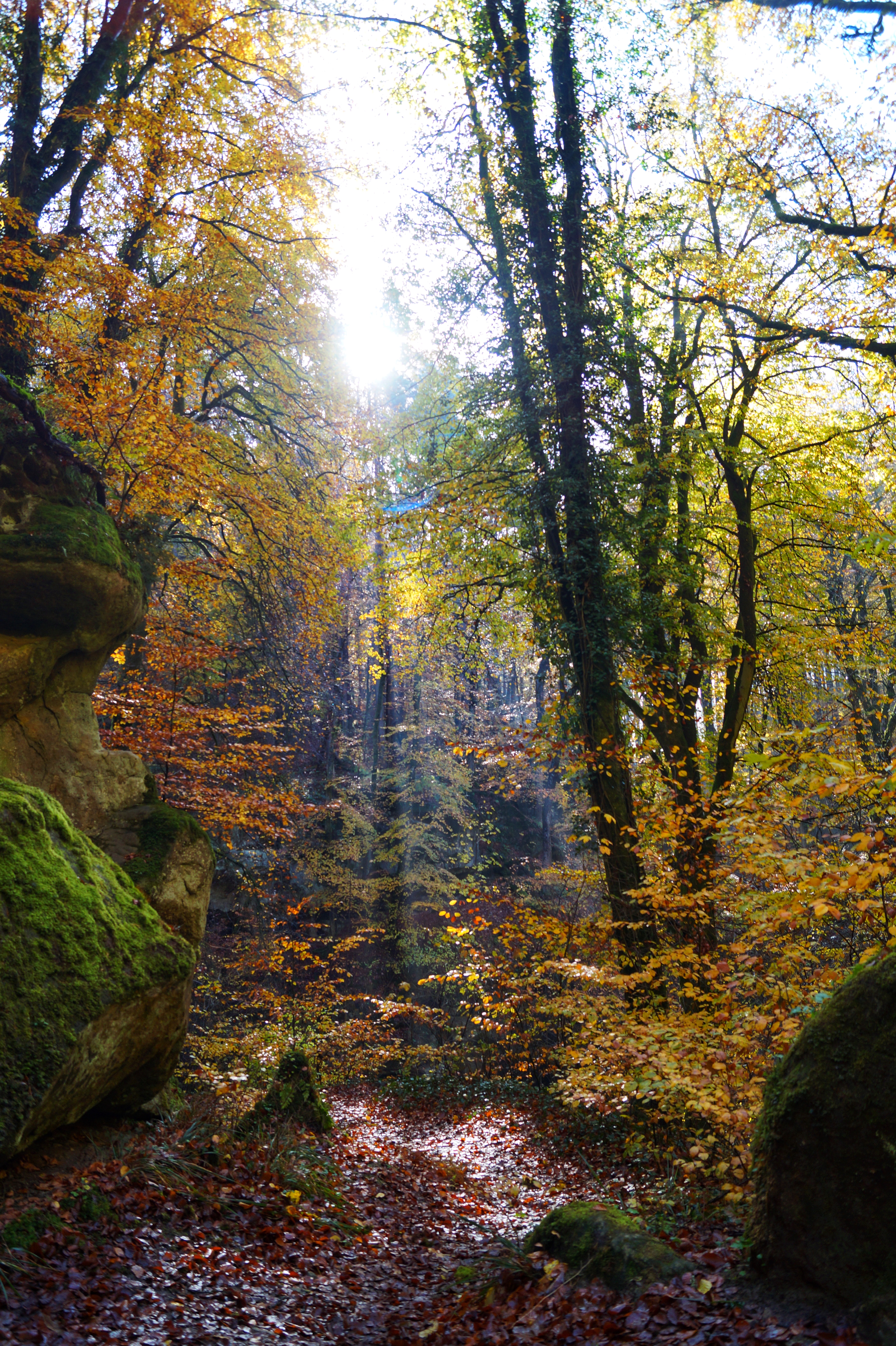 Thirteen years since our previous visit… 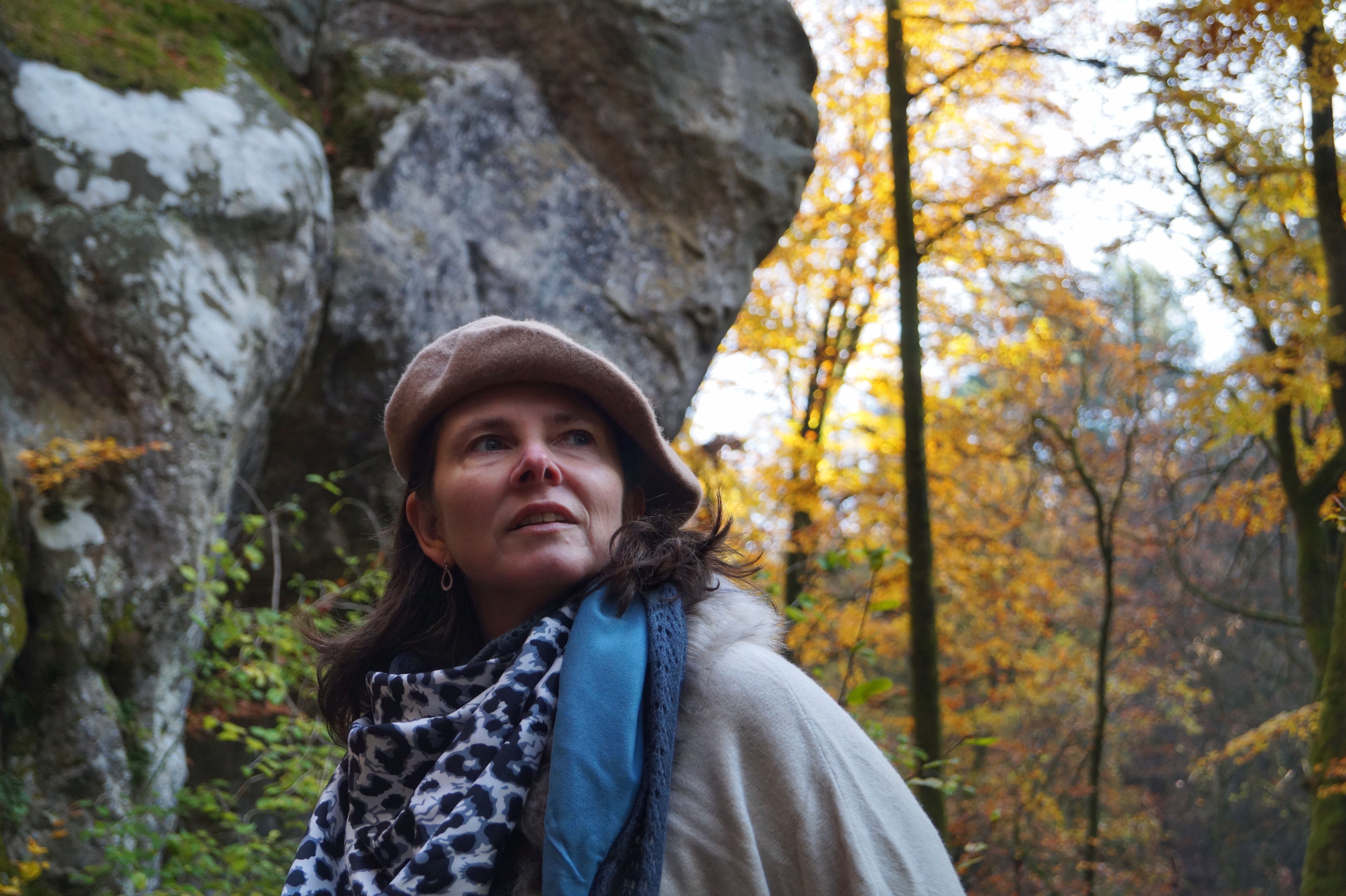 however don’t be alarmed 😉

Now that days are getting colder and shorter and the  soil is covered under a multi-textured carpet of soft rustling leaves little wonders carefully show their heads…whether leaning against a tree, feeding on dead wood or in full spotlight…I always stop to admire these wonderful fungi in all shapes and colours.

Studies showed that what controls forest diversity is not the trees but the fungi that interact with them, some are visible to us, some on a microscopic scale below ground and hidden from sight.

Join me on this walk through the park, eyes on the ground… 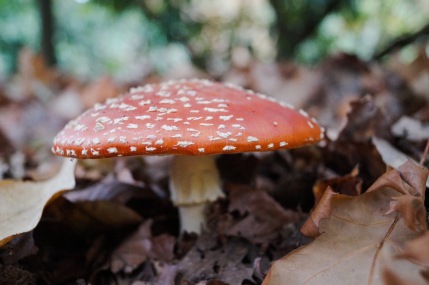 We have so mushroom for a fungi like you…

Fall…of all seasons surely the one with the most vibrant colours, the purest emotions, the strongest contrasts…we said goodbye to those long warm Summer evenings carrying  the sounds of crickets and playing childern. We start cocooning again and it’s the sound of wood cracking in the fire place that brings comfort…that and the aroma of a beef or lamb stew!

‘Every leaf speaks bliss to me, fluttering from the autum tree’ (Emily Brontë)

Though I am a big fan of the changing seasons, it’s a double feeling as for me it usually announces a period of more back pain. The combination cold and wet weather just doesn’t match my bones and joints and consequently my mood. So far we have been extremely lucky as we are blessed with a dry and sunny fall, keeping that blues and those aching joints under control and leaving more time to enjoy and observe the changes in surrounding nature!

Our tree of gold in the garden

Of course you can schedule a walk in the woods or countryside somewhere remote and sometimes it’s truly worth it covering the distance by car to get there but very often, well, just stepping outside is sufficient. These photos are all taken in our own garden and local communal park so whenever that ‘fall of the leaves’ blues get you in its grasp, just start walking, let your eyes wander and let them lead you through the wonders of this season…enjoy! 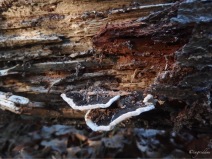 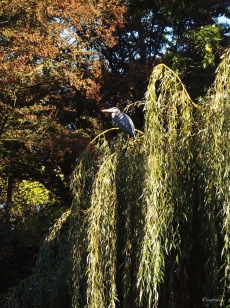